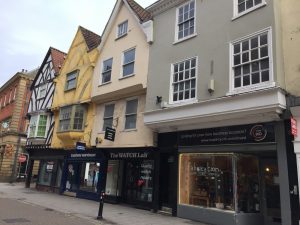 Fabrication Crafts is excited to announce that it has received a National Lottery Heritage Fund grant of £9,700, for a heritage project researching and reinvigorating the heritage crafts that have been created and traded on Coney Street in York City Centre. Made possible by money raised by National Lottery players, we will work with local people to identify the trades and skills that once made this a vibrant trading area for artisans and crafts people.

Supported through The National Lottery Heritage Fund, based on the research findings we will develop and run workshops, demonstrations, oral histories and talks, to raise awareness and for people to develop skills in these traditional crafts. So far we know that there have been tailors, corset makers, print makers, bootmakers, and tin and coppersmithing practiced on the street, some of which are on the endangered heritage crafts list

Fabrication Crafts is an organisation that was set up to promote the heritage of traditional manual craft skills as we believe the importance of keeping traditional crafts alive is vital. Since November 2018 we have been lucky enough to run a pop up shop for local artists and designers in the 1600 built listed building of 24 Coney Street York, owned by the National Trust, which has brought together the key elements of our organisation and inspired this project.

We will be collecting the stories of those who have worked and traded on Coney Street, and invite people to pop in to talk to us and send us any information and photographs they might have

Fabrication Crafts is a social enterprise set up in 2008 to support local artists and makers with work and retail space and a special interest in heritage crafts. Based in Leeds city centre it also opened a shop in York 2018 and sells work by approx 50 local makers in York
follow @FabricationYO1 for this project on Twitter and Fabricationcrafts on Facebook and Instagram with #yorkheritagecrafts

About The National Lottery Heritage Fund

Using money raised by the National Lottery, we Inspire, lead and resource the UK’s heritage to create positive and lasting change for people and communities, now and in the future. www.heritagefund.org.uk.

This website uses cookies to improve your experience while you navigate through the website. Out of these cookies, the cookies that are categorized as necessary are stored on your browser as they are essential for the working of basic functionalities of the website. We also use third-party cookies that help us analyze and understand how you use this website. These cookies will be stored in your browser only with your consent. You also have the option to opt-out of these cookies. But opting out of some of these cookies may have an effect on your browsing experience.
Necessary Always Enabled
Necessary cookies are absolutely essential for the website to function properly. This category only includes cookies that ensures basic functionalities and security features of the website. These cookies do not store any personal information.
Non-necessary
Any cookies that may not be particularly necessary for the website to function and is used specifically to collect user personal data via analytics, ads, other embedded contents are termed as non-necessary cookies. It is mandatory to procure user consent prior to running these cookies on your website.
SAVE & ACCEPT